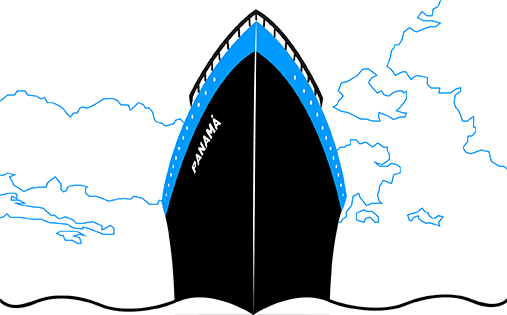 // Connecting the World for More Than a Century //

Panama has always been a transit country. When Vasco Nunez de Balboa crossed the Isthmus in 1513, he found that a narrow strip of land was all that separated the Pacific Ocean from the Atlantic Ocean. This discovery led Emperor Charles V of the Holy Roman Empire (German Nation), who was at the same time Carlos I of Spain, to conduct a study into building a canal across the Isthmus of Panama. After completion of the study, the regional governor of Panama concluded that no one would be able to finish the project. However, this strip of land never ceased to serve as a land route for transporting various products, including food and minerals, from the South Sea to Europe. Panama has always enjoyed special importance thanks to its advantageous geographical position. This is why major powers had such great interest in building a canal that would benefit their economic, geopolitical and military strategies.

The Panama Canal is one of the great wonders of modern engineering and an important symbol of national identity. This was reinforced by its transfer to Panama on December 31, 1999. The Panama Canal celebrates 100 years of world maritime service – a century filled with challenges, sacrifices and successes.

The construction of a route linking two oceans

After three centuries of Spanish interest, the French signed a treaty with Colombia, granting France the exclusive rights to build the interoceanic canal in Panama in 1878. Under the leadership of Ferdinand de Lesseps, construction work began in 1881. However, the tropical storms, stifling humidity, blazing sun, deep swamps and dense, impenetrable jungle of the Caribbean soon prevailed. The greatest adversities of the new venture were malaria and yellow fever. These diseases led to a high mortality rate among the workers. The French were unaware of the origin of these endemic diseases and attributed them to the noxious fumes emanating from the swamps and marshes. The complexity and seriousness of these diseases and subsequent financial problems forced the French to abandon the project after 20 years.

United States President Theodore Roosevelt believed that building a canal was vital to achieving supremacy of the seas and to ensuring military and commercial capabilities. In 1903, the U.S. tried to negotiate a concession to build a canal through the Colombian province of Panama. This proposal was rejected by Colombia, which prompted the United States to provide military support for the Panamanian movement striving to gain independence from Colombia. Panama proclaimed its independence on November 3, 1903. Shortly thereafter the Hay-Bunau-Varilla treaty was signed granting the United States a permanent concession for the canal along with sovereignty over a vast territory at each end of the canal route. Although the terms of the treaty conflicted with the sovereignty of the newly formed republic, the founders agreed in an effort to secure continuing U.S. support.

In 1904, the United States purchased the rights and assets of the French Compagnie Nouvelle du Canal de Panama for $40 million and started construction. This monumental project was completed over 10 years, at a cost of nearly $387 million. The success of the United States was largely due to their engineering skills, their efficient management, as well as their eradication of malaria and yellow fever by identifying mosquitoes as carriers of these diseases and establishing public health measures to tackle them.

Opened on August 15, 1914, the Panama Canal revolutionized international trade by dramatically shortening distances and travel times. Ships traveling along this 80-kilometer route between the Atlantic and Pacific Oceans avoided a journey of roughly 8,000 nautical miles around Cape Horn in southern Chile. A banana boat traveling from Ecuador to New York could shorten its journey by 7,366 nautical miles.

Although the Panama Canal was built in Panama, it did not belong to the country’s citizens: access to the land under American jurisdiction was forbidden to Panamanians. This led to protests that reached their peak on January 9, 1964 when a student movement tried to raise the Panamanian flag in the Canal Zone. The unjust military aggression by U.S. Armed Forces that followed resulted in the death of 21 students, a situation that led President Roberto F. Chiari to break off diplomatic relations with the United States. Several years later, the Torrijos-Carter Treaties were signed in 1977 between the United States and Panama. These agreements led to full Panamanian control effective at noon on December 31, 1999. After 85 years of American administration, Panama regained full sovereignty over the canal and the lands that were previously considered the property of the United States.

This represented a great responsibility for the Panamanian people, who have risen to the task successfully. During their 85-year administration of the Panama Canal, the United States gave Panama $1.878 billion. This amount increased fivefold during the first 15 years of Panamanian administration.

1,055,000 ships have passed through the Panama Canal over the past century. The economy and stability of the region depend largely on the safe passage of 13,000 to 14,000 vessels carrying some about 3,000 million tons of cargo each year. With more than 144 shipping routes and connections to 1,700 ports in 160 countries, the canal has not only changed the patterns of world trade, but has also fueled the growth of developed countries and driven economic expansion in many remote areas of the world.

Over the past 100 years, the maritime business model has changed to accommodate new markets and economies on a larger scale. Technology has enabled larger vessels capable of transporting bigger loads at lower cost over shorter periods of time with less environmental impact.

In order to compete in today’s market, Panama has invested in the construction of a third set of locks that will accommodate so-called post-Panamax vessels, which make up only 16% of the world fleet but carry 45% of the world’s cargo. With this expansion, it is estimated that the volume of cargo passing through the canal will double. But it will still be too small too handle new-generation ships such as the Maersk Triple-E class vessels.

According to the International Maritime Organization, more than 90% of world trade is transported by sea. In order to satisfy current and future demand, Panama will need to develop a range of port logistics services to complement the expansion and help the region remain competitive on the global shipping market. These services include a water rail for containers, which complements the existing land railway, terminals for the supply of liquefied natural gas and distribution of automobiles, a logistics park and a repair facility for post-Panamax ships.

The Panama Canal is one hundred years old! As a Panamanian, I am very proud of what we have achieved as a country. In my teens, I wasn’t familiar with the Canal Zone – it was an intimidating, far away and foreign territory. I always wondered what was on the other side of the dividing fence. Fortunately, three years ago I had the opportunity to return to Panama and work for an organization within the Canal Zone. For the first time, I was able to connect with these lands that were so unknown to me. The sweeping fields, lush trees and tranquility create a perfect picture that is complemented by the steady parade of ships. The excitement I felt watching them pass through the canal from my office window is a feeling I will never forget.

The Panama Canal is the result of the vision, commitment and aspiration of great entrepreneurs who sought to connect the world. Without them, it is very likely that the canal would not exist today. All those who were involved in this complex work made it not only an international waterway, but also the canal of the Panamanian people. Now, the Panama Canal’s next 100 years depend on us, the Panamanians.

Evelyn Alemán Cuervo was born in Panama City. She studied International Business at Hawaii Pacific University and graduated with a master’s degree in North-American studies from the Free University of Berlin (Freie Universität Berlin). She has worked for the University of California, Los Angeles (UCLA), the Federation of German Industry (BDI) and the United Nations Environment Program (UNEP). Currently she works for the German TV station Deutsche Welle in Berlin.