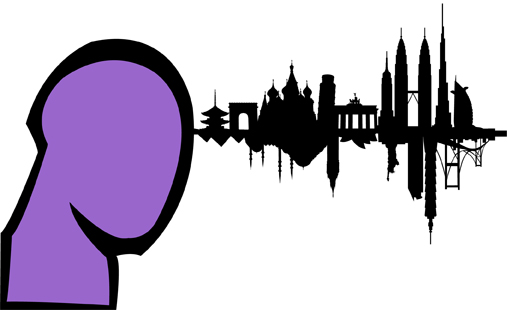 // The impact of art in public spaces //

“Only very few pieces of architecture can be regarded as art: gravestones and monuments. Anything that serves a practical purpose should be excluded from the realm of art.” Adolf Loos, Architektur, 1910

In the late 1990s, black-and-white photographs appeared on several billboards in downtown Bogotá. They had no slogans or words advertising a product. Instead, the photographs conveyed a sense of emptiness and depression. One photo showed a bed in which someone had recently slept in, with a twisted white sheet and pillow showing an outline of the occupant’s head. The wall behind the bed was blank. Although it was a black-and-white photograph, it communicated an impression of warmth. Amid the bustle of the city, billboard viewers on the other side of the street were invited to share in the intimate world of a stranger.

The work described here was created by Cuban artist Félix González-Torres. The artist uses billboards in different cities for his creations. He takes normal advertising space, which usually goes unnoticed, and transforms the street into an exhibition space. In addition to images of forceful, candid intimacy, he works with words: names and dates commemorate important events in the history of gay rights, or a sentence points out failures in the U.S. healthcare system. He occupies spaces typically used for commercial purposes, and uses them to commemorate people and events that tentatively touch on these minor, but vastly significant stories.

They say that history is usually written by the victors. Statues and monuments in city squares and parks seem to verify this. Every city has countless monuments commemorating famous people, achievements, events and victories. This commemorative approach corresponds to a viewpoint that immortalizes war as a history-making event.

From the perspective of modern architecture in the early twentieth century, the monuments that once occupied public spaces were regarded as decorative, non-functional elements. Following the advancements in technology and building construction in the 1950s, large prefabricated residential complexes started to gain popularity everywhere in the world. Urban planning that focused on sprawling blocks of houses was the legacy of architects like Le Corbusier and other advocates of cities built according to functional principles. Based on this approach, architecture was regarded as a means of solving social problems. In cities designed according to these guidelines, the plan was to create public spaces in line with the principles of functionality. The weaknesses in this city planning concept soon became apparent. Entire urban areas built according to the principles of modern architecture soon became socially disadvantaged, conflict-ridden neighborhoods.

The emergence of graffiti and street art demonstrates the human need to create new means of expression. Beyond any discussion of the artistic value, these forms of communication unequivocally question the traditional approach to art in public spaces. Outside of museums or galleries, art does not meet the requirements when it comes to understanding and reflecting the complexity of social reality in urban areas. It’s not enough to change the format or create a work capable of withstanding weather or vandalism. It is essential to understand other preexisting codes and media that create a means of dialogue with different groups. Above all, it is important to recognize the need for expression that arises from circumstances of social, economic and cultural conflict.
The example of Félix González-Torres’ work shows how some artists explore new fields and different ways of representing the historical context in which they live. González-Torres has clearly mastered classic (institutional) art, but his concern about the healthcare system and other issues leads him to use new spaces (the street), explore new media (photographs and words) and create a new audience outside the circles of those traditionally interested in art.
History, memory and monuments coalesce in public space to create one of the most exciting and most controversial fields of contemporary art. Artists active outside the walls of museums and galleries are exposed (as is their work) to difficult environmental conditions, larger spaces and the threat of vandalism. They are also working in a space with converging political forces, which do not necessarily go hand in hand with what the artist wants to express. In addition, codes must be used that can be understood by audiences in public spaces as well as by the art world. An artist creating a work for a public space needs to carefully prepare and plan in advance.

Artists working in public spaces must first investigate the site and the chosen themes. This includes collecting data, researching photo archives and newspaper articles, mapping the site, conducting interviews with local citizens and inspecting the actual sites. This gives the artist the tools required to understand the space and the audience. With the help of available media, the artist attempts to integrate stories and people into the scope of history. In this way, the artist not only discovers new territories for expression. He also uses new language systems and incorporates an audience that, because of its social and economic circumstances, tend to be beyond the reach of cultural institutions.

The ancient Romans coined the term genius loci referring to the protective spirit of a place. They believed that all places were inhabited by a spirit that served as a means of protection. It was very important to the Romans to be able to recognize and engage in dialogue with this entity before interfering with the space in any way. To some extent, this concept corresponds to the approach used by Francis Alÿs for his “Bridge/Puente” project and is a good example of how an artist comprehends the genius loci.

The idea behind the project launched by Alÿs in 2006 was to create a bridge of fishing boats extending across the water between Havana, Cuba and Key West, Florida. The boats would line up from each shore and eventually meet in the middle of the ocean. Although the project was never “successfully“ completed, its meaning goes beyond the image of an (un)finished work. Its true strength lies in the way Alÿs recognized a political conflict (Cuba-United States) and taking into account the geographic realities (the sea separating the two coastlines) and the people (Cuban and American fishermen), he used available tools (boats) in an attempt to explore the fictive possibility of solving a political conflict by building a bridge of boats. The unfinished bridge symbolizes the unresolved conflict between the two countries.

Everything we do leaves traces: what we eat, what we wear, how we travel. But it is our forms of expression – fine arts, music, dance and theatre – that give us the tools for understanding and reflecting on future ways of thinking. Herein lies the great value and the responsibility behind cultural expressions. Walter Benjamin said that the past is never simply behind us and can never be erased, but will always serve as a basis. By using codes and elements that are part of a visual language, the artist communicates events and ways of thinking for future generations.

The possibility of reconciliation with our memories and conflicts should be a right in any democratic society. Therefore it is important to have artists who work from the outer edges, where art spreads out and is more inclusive than exclusive. A multifaceted cultural map can be drawn up from work that is produced in a specific sociocultural context and is engraved on a particular area. Memory is something that allows us to understand each other as human beings. It gives us a context in which to comprehend our role within society and culture. At the same time, it enables us to fulfill our duty as individuals. The listing of these memories will make it possible that someday history will serve us as a source of reflection.

Some artists make a commitment that goes beyond the expression of ideas and their own experiences. Their work becomes a reflection about life, based on everyday experiences in a particular social and cultural context. Antonio Palomino, author of a biography about Diego Velázquez, said that the painter was interested “not in a daily wage (…) but in posthumous fame and honor.” Viewed in another way, the artist’s obligations go beyond his immediate existence.
This seems like a paradox, since González-Torres’ photographs and Alÿs’ bridge of fishing boats are temporary and ephemeral. At the same time, actions in increasingly controlled and monitored spaces, that do not take place from a perspective of vandalism or violence, become powerful tools. They can be used to transform public space into a place for reflecting on societal truths. Art has begun to reclaim everyday spaces, creating a setting where the human spirit can grow.

Roberto Uribe Castro studied architecture at the Universidad de los Andes in Bogotá, Colombia. He earned a master’s degree in spatial strategies at the Kunsthochschule Weißensee in Berlin. He is currently working for the NGO Stadtgeschichten on public space projects in Berlin, Rome and Bogotá.