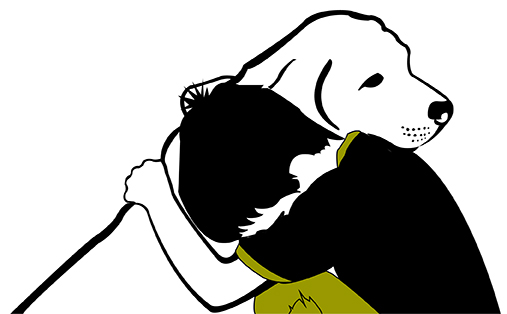 At the entrance of a country estate near Valle de Bravo, Mexico, a dog was crossing the road at the very moment a truck was entering the driveway. The truck’s bumper hit the dog’s head and the dazed animal collapsed under the vehicle. But the driver didn’t seem to realize that he had hit the dog, which became trapped between the edge of the pavement and the truck’s rear tire when the vehicle finally stopped. Although the dog had not been run over, it was obviously injured and dragged itself behind a planter at the side of the driveway. The dog was a stray, one of thousands in rural Mexico.

I was nine years old at the time and watched this scene unfold in a near state of shock. We were on vacation at the estate and, as fate would have it, there was no one around to witness the accident other than a couple of workers and the truck driver.

I returned a few hours later to see if the dog was still there. The workers were pulling it from behind a bush with a rope. They told me they needed to use the rope to keep the dog from biting them. The poor animal was howling and obviously in severe pain. In my innocence, I asked them what they were going to do with the dog and whether they would nurse it back to health. But in my heart I knew they would only remove it from the property and leave it to die somewhere in agony, unable to move. Still today I feel a sense of anxiety and helplessness when I think of this nightmarish scenario. The images are forever etched in my memory, in my heart.

I have loved animals ever since I was a very young child. And I can’t help but feel pain and compassion when I see them suffering or abandoned. I’m not sure whether this feeling is innate or simply comes from life experience. But I know the feeling is shared by people across all social and education strata. Animal lovers vary widely, from those who rescue stray cats and dogs from the street, to the ultra-radicals who don’t eat honey because they think its production exploits bees. The serious academic discussions on these issues often polarize opinions rather than bring people together. But that is the starting point of any social evolution. The challenge lies in bringing the logical and emotional aspects together to initiate programs aimed at supporting animal welfare.

In a country like Mexico, stray dogs and cats in distress are seen everyday. Most people react with indifference. But the figures are alarming. It is estimated that the country has about 14 million dogs (and probably a similar number of cats) on the street. Eight out of ten dogs suffer in their first year of life. This figure is roughly the same for purebred dogs. These animals are left out on rooftops, tied up in garages, slaughtered in so-called animal health centers (which basically function as abominable dog pounds). Many are used in illegal dogfighting or abandoned on the roads or highways and eventually run over.

Two main reasons for this problem are the unregulated sale of animals and the lack of responsibility among pet owners. Unfortunately, most animals are sold in Mexico at local open-air markets (called “tianguis”) or are raised by breeders under horrifying conditions. Dogs and cats are kept in backyards and locked in cages for their entire lives. The buyers are deceived about the dog or cat’s breed, state of health and age.

The second aspect is pet owners’ lack of responsibility. Sterilization is not regarded as important or as a viable solution to the problem of overpopulation and abandonment of unwanted pets. One continually hears senseless arguments, like “we want her to experience becoming a mother”, ​​to justify a dog or cat having one or more litters that end up homeless. At the same time, men are typically shocked and mentally put their hands over their private parts when you suggest neutering a dog or cat. It is important to calm them down and address the complicated issue that animal ‘reproduction’ is different from sexuality as humans understand it.

Has any progress been made? Yes. We are gradually heading in the right direction. Twenty-five years ago in Mexico, people who rescued animals and placed ads seeking responsible homes for adoption were castigated for using the word “adoption” in regard to animals. They were reproachfully told that the term could only be used for the adoption of children. Today, the image of people committed to animal welfare is no longer that of an animal hoarder of questionable mental health keeping a brood of cats and dogs in an overcrowded, filthy house. The authorities also are doing their part. A law has been proposed for no-cost neutering campaigns throughout Mexico. A growing number of states are passing laws that punish animal abuse. The more complicated issues, such as the prohibition of circus acts and animal variety shows, are also being addressed.

The issue of animal welfare is gaining more attention worldwide. Social networks are effective tools for creating global awareness about respect for animals. People are moved to respond more quickly to rescue cases and to support pet adoption programs. Social media is also an important way to expose abusers and bring about mass media attention. The state of Jalisco recently passed an animal protection law that finally makes animal abuse a criminal offense punishable by imprisonment. This was a direct result of Facebook photos showing a man burning puppies alive. The images were secretly filmed by a neighbor.

Becoming directly involved in the issue takes its toll, emotionally, financially and even in terms of one’s family life. The number of cases reported daily is overwhelming and the problems are immense. These issues are fraught with passion, commitment and organizational chaos. It is important to take an intelligent, focused approach to animal welfare projects. Unfortunately, many of the efforts depend on one or two people. When they pass away (and many keep working until the very end), their work is disrupted or simply comes to a halt. It’s obviously impossible to save every single animal. But each new volunteer, each discussion, each rescue effort and happy ending helps build the strength and stability of our platform. It’s important to stay focused and disciplined to achieve success.

There will be a big change in Mexico when future generations manage to break the Latin paradigm of the Catholic tradition that assigns responsibility for charitable actions or support to the government or to religious orders. It’s time for society to wake up! Everyone can help in some way or contribute their resources, no matter what the cause.

I will continue to actively support animal welfare. Fortunately, I am in a position to make a difference for the many dogs and cats that are not lucky enough to be rescued and cared for – like the dog that was hit by the truck at the entrance to the estate.

María del Carmen Portilla Pons (born in 1967) studied law at the Instituto Tecnologico Autónomo de México, and earned master’s degrees in European and International Business Law at the University of Leicester and in Business Administration at the University of Edinburgh. She worked for 18 years as a corporate lawyer for multinational companies. She is currently director of Pet Help, A.C., which she founded in 2004 in Guadalajara, Jalisco, Mexico (www.adoptandounamigo.mx). This non-profit association is dedicated to the rescue, rehabilitation and adoption of dogs and cats that have been neglected or abused. Further information: Portilla.maricarmen@gmail.com