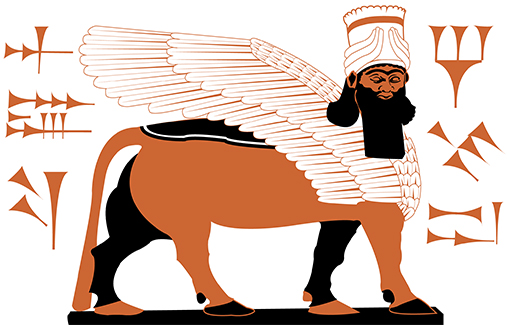 // Cradle of civilization: Iraq from an archaeological perspective //

The idea of Iraq is closely linked to its history: It is a land of high culture, discovery, and development.

Around 10,000 B.C., people gave up the nomadic life and settled in Mesopotamia (the region between the Tigris and Euphrates Rivers), where they began to specialize and practice agriculture. Individuals used their skills for the good of the entire community as well as for their own benefit. The history of cuneiform culture began around 3,000 B.C. From that point on, cuneiform writing on clay tablets served as a form of communication and helped spread ancient Near Eastern culture.

Cuneiform script is a system of writing distinguished by wedge-shaped marks on clay tablets, metal, wax and other materials. Cuneiform was first used to record figures and calculations with small pictographs in clay at the end of the fourth millennium B.C., at the time of the Sumerians and Akkadians, possibly in the city of Uruk. It eventually developed to become a decisive point in the invention of writing.

The script initially consisted of pictographs and became more abstract over the years. A sharpened 20-cm reed stylus was pressed into wet clay to make characters. This marked the beginning of the written Sumerian language. The expansion of trade in the third millennium B.C. led to further developments in the script. This new writing system, called cuneiform, was read from left to right. It originally served as a record of public accounting in an increasingly complex society. The script was illustrated in books and taught in writing schools.

Cuneiform reached its peak around 2,600 B.C. Later, it was also used for administration and business purposes, as well as for public records, sales contracts, letters and other documents. It is important to mention that not everyone at that time could read and write. Before 2,000 B.C., there was no other language in Mesopotamia. Akkadian was spoken in addition to Sumerian, and later became the primary, most common language. But until the birth of Christ, Sumerian remained the language of scholars, and Mesopotamians used it to write the world’s first legal texts.

The Code of Hammurabi is one of the oldest codes of law ever found, and also the best-preserved example of this genre in Mesopotamia (Iraq). The text is comprised of 281 paragraphs that deal with different issues, including family and inheritance laws, bodily injuries, liability, slaves and soldiers. A few examples of legal decisions are translated as follows. § 195: “If a son strike his father, his hands shall be hewn off.” § 209: “If a man strikes a free-born woman so that she lose her unborn child, he shall pay ten shekels for her loss.” #210: “If the woman die, his daughter shall be put to death.” The Code was carved into a 2.25 meter high block of black basalt, now on display in the Louvre. It facilitated the management of entire empires, and was passed on in many languages from generation to generation.

Mesopotamia was home to many kingdoms whose legacies are still in evidence today, including the Sumerian civilization, the Assyrian and Babylonian empires, and other major powers.
In addition to the larger cities of Uruk, Niniveh and Babylon, there were small towns, villages and scattered farmsteads. The remains of the Uruk city wall, which enclosed an area of 5.5 square kilometers and dates back to 2,700 B.C., were discovered in Southern Iraq. Many people lived together in organized groups inside the wall. Therefore, we can describe the situation at the time with the term “city.”

Nineveh was one of the most important cities in Assyria, today northern Iraq. Sennacherib made it the capital during his reign from 704-681 B.C., and the city achieved its peak level of prosperity during this time. In 614 B.C., during the Neo-Babylonian Empire in Mesopotamia (Iraq), the Medes, two tribes from northwestern Iran, and the Babylonians completely destroyed the city of Nineveh. The city’s remains are made up of two tells (hills) measuring 4.4 x 2.1 kilometers, the ruins of which were discovered and excavated in the modern age. Many archaeological objects exhibited at the National Museum of Iraq and in various museums in Paris and London attracted thousands of visitors from around the world.

Babylonian cities in the second and first millennia B.C. were characterized by large structures, such as fortifications, temples and palaces. The Neo-Babylonian Empire achieved prosperity under King Nebuchadnezzar (605-562 B.C.). The city of Babylon is a magnificent example of the display of power during this period. Thousands of cuneiform texts described the city and its monumental constructions as one of the wonders of the world.

Babylon was a center of culture, business and politics during the New Babylonian era. The ruins of the city lie on the River Euphrates, some 80 kilometers south of Baghdad. It was one of the largest cities in antiquity, with a walled area of 890 hectares. The former Babylonian capital was known for its structures, including the mighty walls with their Holy Gates, the South Palace, the Etemenanki Ziggurat, the main sanctuary for the god Marduk (Ésagila), and the road system. The radical political changes in Eastern Mesopotamia and the religiously motivated move of Babylonian King Nabonidus to Tayma, a center of worship for the moon god Sin in present-day Saudi Arabia, enabled the Persian Empire to conquer the city of Babylon in 539 B.C. without a battle. The Babylonian Empire was succeeded by the Hellenic and Parthian Empires.

Mesopotamian society developed not only in terms of language, which was used to pass down stories and poems in writing, and the construction of large cities. It also developed in terms of politics, economics, religion and art. I did not go into all of these aspects in detail, because several books could be written on each subject. Instead, I have attempted to provide insight from an archeological perspective into the history of Iraq, which goes back many thousands of years.

Uprisings, embargoes and wars have had a major impact on Iraqi society over the past 100 years. The people are preoccupied with the political situation and war. They have never had the opportunity to really engage with their own culture. There has been no joint cooperation between museums and schools or universities. Over time, many people’s interest in their own culture has faded into the background. Remarkable, unique archaeological artefacts fill museums in large cities. The National Museum of Iraq exhibits objects that can be seen nowhere else in the world. But because of the circumstances, only a very small number of locals visit the museum.

Historical cities have also been neglected. For example, there was an attempt to rebuild the city of Babylon during the rule of Saddam Hussein. The consequences of this attempt were that the city was subsequently removed from the list of World Heritage Sites. Many other cities that stand unprotected are also affected. For example, the cultural cities of Nimrud and Nineveh and the museum in Mosul that opened in 1952 were destroyed a few weeks ago by the so-called “Islamic State”.

I and many other Iraqis living at home and abroad wish that Iraq would no longer be associated with war and political instability. We would like to see the land of high culture shine again in all its glory and become a prime destination for travelers from all over the world.

Hussam Zahim Mohammed was born in Baghdad in 1987. He has lived in Berlin since 2006 and is working on a master’s degree in Near Eastern Archaeology at the Freie Universität Berlin. He has served on the board of directors for the Berlin-based Iraqi cultural association Al Rafedain e. V. since 2014. He comes from a family of academics who hold culture in high esteem. He has participated in a variety of projects and is currently working in Turkey on a project (Nerik) supported by the Freie Universität Berlin.